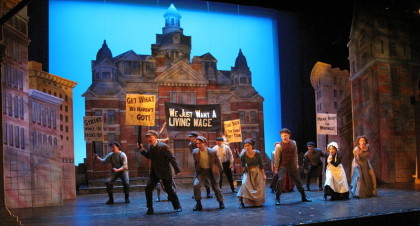 The Edmonton cast at the Timms Centre, April, 2013.

"Strike!" - The Hit Musical That Spawned the Movie "Stand!"

Strike! - the award-winning social justice drama has garnered glowing reviews since its premiere in 2005. The Winnipeg Free Press proclaimed "this play would do more to enable the strength of civil discourse than any of the theories of [a] learned academic conference." Canada's national newspaper, "The Globe and Mail", called the musical "an improbably compelling piece of musical theatre" while the Saskatoon Star Phoenix stated that "[Strike!] gives you everything you want: a love story, a suspenseful plot, a collection of good songs and a history lesson that teaches you something about yourself."

The historical musical finds its inspiration in the seminal story of the 1919 Winnipeg General Strike. In addition to scores of regional theatre productions, the musical has been broadcast as a national radio special, published as an interactive book/CD and featured in two TV documentaries.