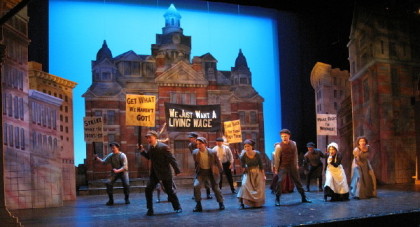 The 2013 Edmonton cast at the Timms Centre

"We were struck by the epic nature of the work and the contemporary echoes of immigration and terrorism lurking around every corner....[an] evocative and imaginatively conceived musical." - Mark Bly, Alley Theatre, Houston

"A touching and haunting story. The music is quite lovely and seamlessly underscores the struggles and triumphs of the immigrant workers." - Jeremy Cohen, Hartford Stage

"The topic and issues addressed are of vital importance to us in a world in which most workers do not understand that the working conditions they enjoy today are the result of the struggles of thousands of workers for their rights. You approach this subject with seriousness and humour and those are rare to find together and much appreciated when they are." - Richard Kotulski, Wilma Theatre, Philadelphia

"Like the 1918 Influenza epidemic and the North End of Winnipeg, the 1919 Strike is iconic. I haven’t read a musical in a long, long time. Perhaps not since high school when I was auditioning for Annie. But unions and democratic dreams are part of my family history so this book caught my eye. There is a CD that you play while you read. I think this is the first interactive book that’s made sense to me." - Monique Trottier, Boxcar Marketing, Vancouver, Canada

"When I agreed to read the play, our publishing year was almost at a close. I'm not wild about musicals but I love this play. It's fabulous. We so loved the text, the lyrics, and the historical nature, that we're squeezing it into this year's publication no later than November." - Angela Rebeiro, Publisher, Playwrights Canada Press, Toronto, Canada

"A lot of people said they heard it. [The Strike! CBC Radio-Concert Special, September 3rd, 2007.] A number commented that they found the story easy to follow and came away humming the music - always a good sign. The performers were also strong. I wouldn't hesitate to work with Danny on a project again." - Sandy Thacker, Producer, CBC Radio Winnipeg after the Strike! CBC Radio-Concert Special

"Thanks so much for putting together Strike for our Labour Day programming. The set up worked well, the right tone was established, the transitions went so smoothly, and even though I knew the story I learned a lot about the tension between groups at the time. Thanks again for all your effort." - Havoc Franklin, CBC Radio Specials, Toronto, ON, Canada

"I thought the book was substantial and from a human side there was great heart to the piece. There shouldn't be a theatre in the country that shouldn't do it." - Andrey Tarasiuk, Director of New Play Development, Stratford Theatre Festival, Stratford, ON, Canada

"I enjoyed reading/watching the tale of this fascinating moment in history, which has many eerie echoes with the present moment (for example, the government's use of totalitarian reasoning to suspend civil rights and suppress protest). The story of love and betrayal between the two neighbouring families keeps the political detail compellingly grounded in emotional stakes, and the rousing musical numbers are impressive." - Amy Wegener, Guthrie Theatre, Minneapolis, MN, USA

"[Strike!] is a compelling and touching portrayal of the power people find when they rely on eachother.....[a] special project that aims for so much more than the lowest common denominator." - Lauren Mitchell, Dodger Theatricals, NY, NY, USA

"My reaction is one of admiration. You found an important story and not only wrote and composed an impressive score, but it looks as if you also produced a terrific production." - Edgar Dobey, Trinity Repertory Company, Providence, RI, USA

"It's a wonderful theatrical piece. It's a Canadian story and we have to learn about our history. I loved the music. I loved the guts and courage he [Danny Schur] showed to put on this show. With that music and that history, I know my people will like it. For me, a play about the Winnipeg Strike is a classic." - Tibor Feheregyhazi, Artistic Director, Persephone Theatre, Saskatoon, Canada

"I thought it was so invigorating and fresh, with such a good combination of purpose and formality, but with the right flavour to it. It didn't suck, and it could have, you know, because the subject matter could be schmaltzy. It wasn't. It was innovative and inventive. I'd be honoured for it to play here." - Leslee Silverman, Artistic Director, Manitoba Theatre for Young People, Winnipeg, Canada

“Strike! is fascinating and definitely a story that should be told…..your project is eminently interesting.” - Paul Gross, star of Due South, Slings & Arrows & Passchendaele

“A full-scale musical set during Winnipeg’s 1919 strike, it is of course an important story to Winnipeg, but I also think he's hit his stride as a storyteller, and what is politically, personal and emotionally specific to this story is now resonating universally, as any good story should. Simply stated, I think it works, and the music is fabulous.” - Brian Drader, Playwriting Co-ordinator, National Theatre School of Canada & Governor General Award Nominee