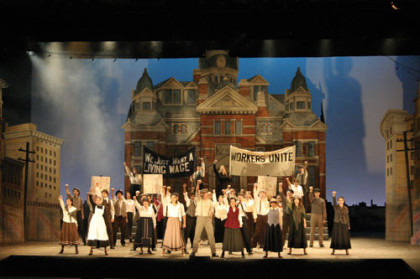 Old World hatreds collide with New World ambitions in Strike! - an epic story of courage, passion and hope on a collision course with power.

It's 1919. Brisbane, Seattle, Barcelona - workers demand their share of the post-war pie but big business and big government say "No" to crippling general strikes. But in Winnipeg, the "Chicago of the North," the entire city shuts down for six weeks and becomes the nation's battleground for the democratic dream.

Mike Sokolowski and his son Stefan have escaped Europe only to become "enemy aliens" in Canada. But where Stefan finds social justice in the strike, Mike sees a threat to his slave-wage job - his only hope of saving his family from revolution in Ukraine. When Stefan falls in love with Rebecca, the pro-strike Jewish suffragette, making a deportation target for them all, Mike turns against the strikers and their growing hope of changing the world.

Strike! may be performed with as few as ten actors, with musical accompaniment on CD or via three- to ten-person orchestra. Promo CDs and scripts available on request.