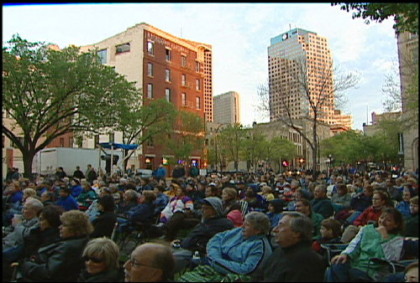 The 2000+ audience enjoying the Strike! Mini-Movie-Musical in Old Market Square, Winnipeg on May 13th, 2006.

My son and I took in [Strike!] and were completely knocked out by the whole effort; the play, the performances, the power of it..  wow.   Great job. - Brian Dunsmore, Edmonton, AB

YOUR PRODUCTION WAS GREAT!!!!!!!!!!!!! I brought my daughter (grade 4 schoolteacher) and my niece from Atlanta, Georgia (former Winnipegger) and we all loved the production and went home singing the theme song. You did a wonderful job on both fronts and this should go on to Broadway!!!! - Dee Godfrey, Winnipeg

Thank you for giving us the show "Strike!" I watched the Saturday performance and was engrossed by it. Until a few months ago, I had never heard of Winnipeg's General Strike and its consequences for Canada. (I immigrated from England a year ago.) The more I researched the Strike the more incensed I became, but it wasn't until last night's performance that I felt the full emotional impact on the people involved, and it brought tears to my eyes. - Jay McKay

Just wanted to say that we were very impressed, wonderfully entertained and intellectually challenged by your play - what more can you ask for from a piece of theatre! My wife and I took my parents, who were in from Ottawa area, to the play to help celebrate their 40th anniversary. Although my father has his own personal views on unions, they were both absolutely engaged by and sympathetic to the characters. It truly whetted their appetite to learn more about the events of the strike. And of course, the music and songs - WOW! Just utterly fantastic! I must say, your enthusiasm for your work is appreciated and contagious. - Dave Meister

What an outstanding production! My friend and I were blown away. I applaud you for your perseverance for bringing your project to fruition. I'm a nurse and all my co - workers that I've talked to (all of us were involved with the nurses' strike in 1991) are very impressed with your hard work. - Debbie Hurrell

Gotta say I really loved the show. A really engaging story, remarkable history, 50 Dollars was powerful, great singing, and the prayers at Mike's grave gave me a lump in the throat. Congrats to Danny and the performers...go see the show! - Jeff Sisler

Well, we were there yesterday and it was, again, a smashing success. I've taken my kids to the 2004 Market Square performance, the performance in Kildonan Park, the screening of the film concept at Market Square and now took a birthday party of kids and parents to the 'performance in the streets'. The music was, of course, wonderful as always. And it was really special to be able to participate in the performance, right in the streets where it happened. I'm so grateful, once again, that you have brought the strike to life for Winnipeggers! Keep it up! - Karen Ridd

I don't know how much of your soul is invested in your work but God will reward you. I spoke to a number of people after the show [May 23rd, 2009] and they were awed and inspired. I personally was humbled. I am an immigrant to this country and come from the Union Jack. I became a Canadian citizen in 1983. I thought I knew a lot of the history of our city but you gave the General Strike new meaning to me. I will forever be thankful for what I saw today. - Mal Anderson

I heard your musical, "Strike!" on the CBC on my way back to university this past September. I was deeply moved and very impressed. Finally two of my favourite things, Canadian history and musical theatre together at last! - Joanna Oda, Ottawa ON

That was one of the most amazing, moving performances I've ever seen. I loved it. What can I say? It was two hours of aural pleasure, first class acting, and memorable stories. Magisterial is all I kept thinking. It was rich and very beautiful. I want to come back in my next life as an actor in Strike! - Andrew Boardman, Winnipeg, Canada

It could be a sign of a nation's maturity when people believe that our stories, bad times as well as the good, should be interpreted on the public stage. I'd like to extend my appreciation to everyone responsible for the production in any way. It was so well done, and so very worthwhile doing. - Christine Pike, Waseca, Saskatchewan

There is a love story, conflict, co-operation, music, singing, dancing, humour and tragedy. This is unlike anything you have seen and may never see again. I highly recommend you not miss it! - Al Kachkowski, Saskatoon, Saskatchewan

I am writting just to tell you that all of my high school in Borden went to the Persephone Theater in Saskatoon, Saskatchewan to watch the incredible production, Strike!, which was AWESOME!!!! I almost cried a couple of times...and it was funny and interesting, and we all adored it! I think that all the girls' favourite was Marc Devigne playing Stefan... I just wanted to tell u how great the production was! Thank you - Anna Bigland-Pritchard, Borden, Saskatchewan

I attended this play yesterday on Sunday, September 24,2006 and it is by far one of the best plays I have seen at Persephone in quite some time. I encourage you to try and get a ticket. Great bit of history and very moving. - Bev Kowaluk, Saskatoon, SA

Prior to the opening curtain of Strike!, a fellow brother-in-law (lawyer) with whom I have clashed politically from time to time advised me that I would be "blown away" by this amazing musical. He was absolutely right! While artistic licence was practised to some extent, nevertheless the great drama of Winnipeg's General Strike of 1919 was successfully portrayed. All of the forces of misunderstanding, intolerance and fear were dramatized, yet the forces of compassion, love and the quest for social justice were there too. As a former Attorney General and Minister of Labour, I was indeed "blown away" by the portrayal of this historical event, by the music, the acting and the singing. I may be prejudiced, but from my assessment, Strike! rivals Les Miserables. Daniel Schur's production was brilliant! - Al Mackling

I have been attending theatre for seventeen years, and your play ranks as one of the best I have seen. - Alan Dalkie

I had the privilege of watching Strike, the musical this weekend and to put it succinctly, it blew me away! So much, in fact that I was compelled to share my experience. It's pure entertainment on so many levels, a must see!- Frank Catojo

I want to invite you to Winnipeg to witness a musical happening that is so spectacular it defies all description. This is a performance that delights the senses, feeds the soul and stimulates civic discourse. Congratulations to dream weaver Danny Schur. - Winnipeg Member of Parliament Judy Wasylycia-Leis, in an address to the Canadian House of Commons in Ottawa

I hope your inbox is flooded with emails celebrating the success of Strike! because I saw the show last night and was blown away. It easily ranks among the best musical theatre our city has ever staged. The rich vocal harmonies, tight ensemble acting, exuberant choreography and eye-candy sets made the show a treat aurally, theatrically and visually. Congratulations! The talent that you've showcased in your selection of cast and crew makes me burst with pride to be a Winnipegger. - Cheryl Costen

Somehow Strike!-the Musical ties together a lot of the threads in our lives. Danny has made a great contribution to us all, and the impact of the production is not at all limited to those who live in Winnipeg. For me, "This is my home; this is where I choose to live my life" is not a statement about Winnipeg, but about political ideals, social values, emotional responses. I simply cannot overstate how much having seen the production means to me. - Terry Whyte

Fantastic. We thoroughly enjoyed it. It had everything you wanted in a musical. Tragedy, comedy, excellent music, innovation and a great story with lots of real, tangible emotion. We were both in tears during parts of it.  What a difference a century makes, but it seems to me we are still fighting immigration quotas, racial discrimination and a violent world in so many ways. Your story reminds us what the little guy can do and we should continue to persevere. – Phyllis Reader

"Five Stars"!!! Your musical is powerful, inspiring, moving, educational, funny and uplifting. It is first class. You and your team have done a fabulous job. – David & Brenda Newman

Strike! - The Musical is an amazing emotional, enlightening and entertaining production. - Calla Lofvendahl

I saw STRIKE! on Saturday and it was SENSATIONAL! The music is wonderful, the sets are gorgeous, the story is enthralling, the production is first-class. - Sharon Malenchak

Strike! goes far beyond an account of a historic event. We found Strike to be a powerful, engaging story about human nature, choices we have to make between our duty to our family, our principles, ethics and loyalty to our friends. We have seen Strike! as a contemporary tale that made us think how much we do have in common with Canadians from 1919. We share universal human dilemmas that cross time and places. Your musical has brought these universal elements out, reinforced them with powerful music delivered by a truly amazing group of artists. - Tatjana Brkic

I went to see Strike! on Saturday night – I had a wonderful time. The production exceeded my expectations – it looked great, it sounded great, the story was interesting and entertaining. The songs were catchy, the performances were heartfelt and enthusiastic....and I don’t even usually like musicals! – Sara Stasiuk

My wife, another couple and I attended yesterday afternoon's performance of the musical. We were unanimous in the view that the production was excellent entertainment and an edifying experience. What I mean to say is that we loved it and we learned from it and we'll encourage our friends to go to see it. It is clear by the high levels of enthusiasm and professionalism that this is a labour of love and a celebration of art and history and it deserves acclaim. – Ed Labossiere

“Wonderful! I was mesmerized. And by the end I was crying – tears running down my face – both for the moving nature of the story and because the work is so thrillingly good. And so relevant and powerful too.” - Tom Denton