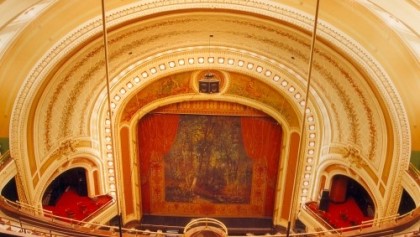 The Strike! CBC Radio Concert Special was recorded May 15th, 2007 at Winnipeg's Burton Cummings Theatre for the Performing Arts. On July 30th, 2008, the radio concert special was awarded the Roger Charest Sr. Award for Broadcast and Media Arts by Edmonton's Grant MacEwan College for its "excellent example of using broadcast media to promote cross-cultural understanding."

May 15th, 2007 was the 88th Anniversary of the start of the 1919 Winnipeg General Strike, the seminal event in Canadian history on which Danny Schur's and Rick Chafe's critically-acclaimed musical is based. CBC Radio One broadcast the recording of May 15th's concert nationally, as a holiday special on September 3rd, 2007.

The Burton Cummings Theatre for the Performing Arts was chosen as the venue for this special performance due to the venue's connection to the events of the 1919 Winnipeg General Strike, on which the musical is based. On December 22nd, 1918, a packed political meeting, at what was then known as the Walker Theatre, laid out the grievances many groups had with the government of the day. The meeting was attended by spies from the Dominion Police Force (later to become the Royal Canadian Mounted Police when merged with the North West Mounted Police). Information gleaned from the December 22nd, 1918 meeting at the Walker Theatre was used against select individuals when they were brought to trial for their involvement in the General Strike, which ended in June, 1919.